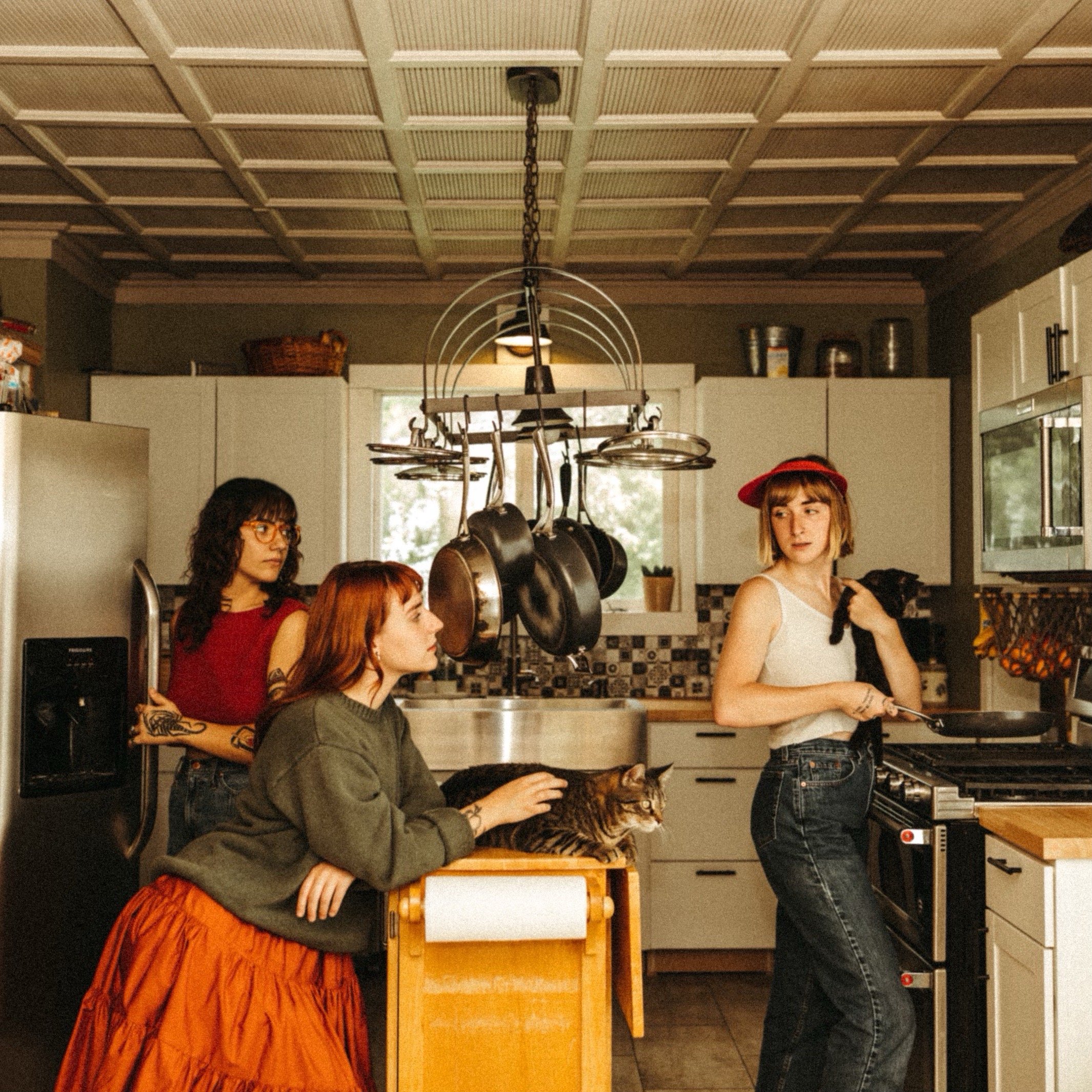 After forming as a 3 piece group just over a year ago in Fort Wayne, Indiana, The Namby Pamby has carefully swept the local music scene off of its feet. Their debut album, Marketplace, marks the start of a feminine folk phenomenon created through their one-on-one narrative lyrics and all-analog production.

The scene is set with lead single “Chardonnay”, a dreamy guitar-led love song. As it progresses, a pedal steel perfectly captures the yearning for love originating from the heartfelt lyrics written by lead singer McKenna Parks. All throughout, she calls sweetly to somebody– confessing to the notion of falling in love and not wanting to stop. After being joined by reciprocating instruments that linger on the feeling, the song slowly fades out of itself and into track number 2.

The next song opens with echoing strings and shuffling drum beats that slowly build in anticipation through its 5 minute and 37 second play time, making it the longest on the album. The youthful lyrics resemble something of a love letter, recounting a lack of space ( “shoulder to shoulder/ eye to eye”)  between its writer and recipient; something like  a pair of “Sardines”, the metaphorically sound name of the track. Thick layers of bass and shimmering cymbals carry throughout the song to its slowburn ending in a passionate vocal plea to get to know the one beside you.

“Peanut Butter Spread” enters the scene carrying confusion and a healthy amount of angst alongside it. As tensions rise throughout track number 3, Parks sings through  a relationship that is losing traction and lacking closure. Following the vibrato that thickly coats pressing  lyrics, breaks of guitar and rotating drum beats come together in spurts up until the very end where a lone, wavering guitar carries the tune (and its respective situation) to its  closing.

Female angst bleeds into the fourth song on the album, “Reality Tonality”, which opens with a straightforward question for its audience: “Why’s it so hard to go to college and get a degree?”. While Payton Knerr harnesses the passion of this song through her drums, McKenna narrates the realities of growing up through a handful of passive verses. The feeling is continuously recaptured through complementary harmonies in each chorus from Emily Parks, 3 wicked guitar solos, and a fuzzy fade out.

“Chewing Gum” is an excitable central track fit properly with energetic drums, lighthearted ad libs, and playful lyrics like “I guess I’m lovesick/ Consider myself stuck in it/ Like the gum on the sole of your shoe”. The song ends with an instrumental finale, stretched and slowed to make room for belting vocals and even a few pumps of synth. This catchy ditty is a true ode to love in bloom, and definitely a good one to come running back to after embracing your more moody side throughout the album.

Track number 6, “Poached Egg”, holds claim to the last edible title in The Namby Pamby’s Marketplace. It also carries the responsibility of being the album’s second single, shortest song, and possibly one of the most memorable from early live shows where McKenna would introduce it by imploring on the audience’s choice of egg cooking. This habit of asking questions carries into the lyrics where, like in “Sardines”, she opens the floor to her love interest’s thoughts: “Do explain what keeps you up at night/ Do explain what your mom thinks of your brother’s girlfriend/ Do explain, do explain, do explain/ Anything”. This song’s curious lyrics share the spotlight with clever production. Emily triples her presence on vocals, bass, and organ, which later yield to a Leslie amp that sends the song sailing to its haunting yet effortlessly dreamy resolution.

“Headlights” is the second to last song on the album and holds true to the album’s core values including emotional lyrics sung in harmony by siren sisters Emily and McKenna Parks, drifting guitar, and a light drum presence you just can’t help but sink into. These all give way, however, to a saxophone solo. This jazzy interlude fills the space perfectly by following the previously established melody and evoking feelings that can’t be limited to words.

“Spare Change” is a solo performance by McKenna that strictly highlights her skills on the guitar and as a chronicling songwriter; there are no backing instrumentals or vocals. Track number 8 sounds like it could have been pulled directly from a diary entry due to its undeniable vulnerability, something that isn’t always easy to find or bond with in song lyrics. Somehow, Parks has delicately bridged the gap between her personal experiences and those of her audience quite perfectly. The duration of the song recounts her dream where she was visited by another. She expresses her love more times than one with lines like “I sink in your embrace so comfortably” and “I swim in your light”. Towards the end, this song will eventually teeter into a heartbreaking realization  as she wakes up from this perfect subconscious world conjured in her sleep. In the real world, she struggles to afford this love, hence the title.

The women of this band have named this timeless compilation perfectly. It truly is a “Marketplace” where they have stretched their arms open wide to a versatile dreamscape of composed emotion. It proudly showcases intimate lyrics, carefully curated instruments, and organic production that are all singular to their sound. Clearly, these elements have resonated with their audience who have shown up and out at live shows and even in the digital world of streaming. Whether you’re spending a few extra minutes in the sun with your thoughts, or on the porch waiting for a pair of headlights, this album is sure to receive you hospitably each time you reach for it.

Current: It is currently 30 degrees out but it feels like 19 degrees outside. The skies are overcast and it is gloomy. The winds are going 19 mph heading east. […]

Tonight: It is a wonderful Friday, so happy Friday everyone.It is currently  71 degrees out with the low for the night being 45. Currently we are experiencing Southwest winds at […]

Tonight: For tonight our temperatures are expected to stay in the mid to high 20 degree range, with cloudy skies. We will be experiencing some westward winds at 7-14 mph. […]